Narrow your results by:

Series contains air photographs of highways in Ontario including: Highway 11 and Highway 17 in and near North Bay; Queen Elizabeth Way from the Freeman Interchange in Burlington to Stoney Creek; and Highway 401 from Pickering to Oshawa.

Photographs in series are arranged by base map number, strip number, and roll number.

The collection consists of geological maps, aerial photographs, and mining and geology publications collected by Fockler during the course of his career as a consulting geologist. The collection also contains material relating to a mineral exploration in northern Quebec that Fockler was involved with in the 1940s. 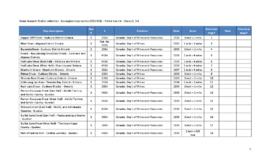 Geological maps of Quebec and Labrador

File contains geological maps of Quebec and Labrador, as well as a paper published by the Geological Survey of Canada Department of Mines and Technical Surveys titled "Iron-formations and the Labrador geosyncline" by G.A. Gross.

File documents the mineral exploration project and the agreements between the partners. File contains: an inventory of the file's contents; correspondence; a report by titled "In the matter of certain distortions of the Earth's magnetic field and the geologic-economic aspects of the phenomenae in the district of Ungava, Canada;" a declaration of trust between Henry Irwin Denton and Ernest K. Gann, Ewart Kenneth Fockler, and Herman Simon Neubeck; a memorandum of agreement between Inco and John Van Nostrand Dorr and associates; diagrams of mineral deposits; and photographs landscapes and a float plane in an envelope labelled "Views of Otish M[oun]t[ain]s. N.W. Quebec - L[ake] Pletipi Region."

Series documents an unsuccessful mineral exploration project in Northern Quebec carried out around 1946 by Fockler and his associates in partnership with the International Nickel Company of Canada (Inco). The project investigated several areas of magnetic anomalies first observed by Captain Ernest Gann's flight crew during a rescue operation in 1943, which could have indicated the presence of mineral deposits.

Item is an annotated aeronautical chart of a section of northern Quebec which bears flight course annotations made by Ernest Gann's flight crew during the Lac O'Connor rescue operation in 1943. The chart also bears annotations from a mineral exploration in the same area that Fockler and his associates conducted later.

File contains research material that Data and Documents Coordinator Tom Power used in the preparation of the narrative history "The Lac O'Connor Story."

Item is a narrative history prepared by the Harris Learning Library's Data and Documents Coordinator Tom Power about a wartime rescue operation in Northern Quebec that inspired Ernest Gann's novel (and a subsequent John Wayne film) "Island in the Sky." The narrative history also covers a mineral exploration project by Fockler, his associates, and Inco that later took place in the same area. The history provides background and context for the other files and items in the series.