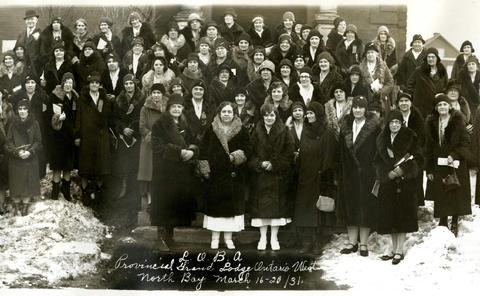 Records were donated by Graeme Martin, Grand Secretary of the Provincial Grand Orange Lodge of Ontario West, to Nipissing University's Institute for Community Studies and Oral History (ICSOH) on November 22, 2004. The records were transferred to Archives by Francoise Noel in 2014.

Fonds reflects the administration of Lady Patricia Ladies Orange Benevolent Association No. 256, particularly its membership, finances, and meetings. Records are arranged into two series: Dues books and membership rolls, and Minute books. The fonds also contains 2 photographs and a treasurer book that are not part of any series.

The image linked to this description (ladies_orange_benevolent_assocation_no_256_1931.jpg) is a detail of a panorama group portrait of the delegates at the Ladies Orange Benevolent Association Provincial Grand Lodge Ontario West convention in North Bay in March 1931. The photograph is <a href="http://archives.eclibrary.ca/l-adies-o-range-b-enevolent-ssociation-provincial-grand-lodge-ontario-west-north-bay-march-16-20-31" target="_blank">item 0003-09</a>.