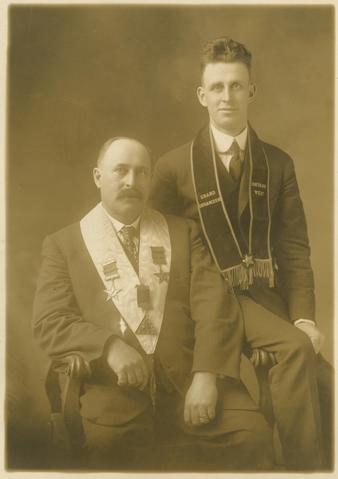 King Hiram Royal Black Preceptory No. 762 was a Protestant fraternal organization in North Bay, Ontario. The Preceptory was founded on June 30, 1909 and named after the biblical Hebrew King Hiram I. It is unknown when the Preceptory was disbanded, but it was likely around 1994.

The Royal Black Institution, to which the Preceptory belonged, is closely affiliated with the Loyal Orange Institution and only Orangemen are eligible for initiation as members. Like the Orange Order, the Royal Black Institution was founded in Northern Ireland in the late 18th century during a period of Protestant-Catholic sectarian conflict, and has a Masonic-style organizational structure and system of degrees.

Records were donated by Graeme Martin, Grand Secretary of the Provincial Grand Orange Lodge of Ontario West, to Nipissing University's Institute for Community Studies and Oral History (ICSOH) on November 22, 2004. Francoise Noel transferred the records to the Archives in 2014.

Fonds reflects the administration of King Hiram Royal Black Preceptory No. 762, particularly its meetings, membership, and finances. Records are arranged into three series: Attendance books; Finances and membership; and Minute books. The fonds also contains records that are not part of any series, including two photographs, lists of preceptors, and annual returns.