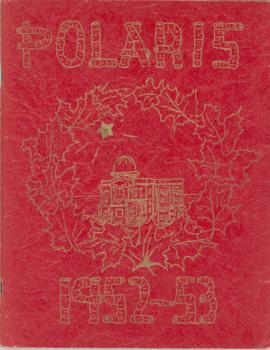 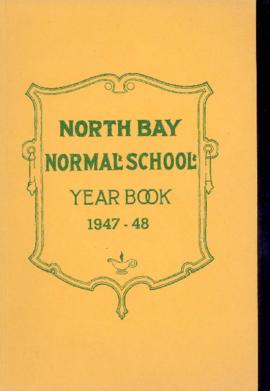 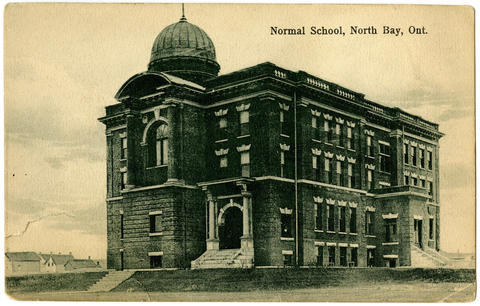 North Bay Teachers’ College was a training school for teachers in North Bay, Ontario. The college was founded in 1909 and was originally called the North Bay Normal School (the name derives from the teaching “norms” or standards upon which education was based at the time). The North Bay Normal School was the seventh normal school to be established in the province, and the first and only school to be established in Northern Ontario. Through the completion of a one-year course at the school, students (mostly recent high school graduates) could become qualified teachers. The school was located in downtown North Bay at 168 First Avenue West in a two-storey brick building, and was initially headed by A.C. Casselman, principal from 1909 to 1930.

In 1953, the North Bay Normal School was renamed North Bay Teachers' College after a decision by the Department of Education to rename the normal schools to better reflect their purpose as institutions for the professional education of teachers. In September 1972 the college moved from its downtown location to the College Education Centre (today Nipissing University and Canadore College's North Bay campus), which had just been built to house it and three other local colleges: Nipissing College, Canadore College, and Saint Joseph's School of Nursing.

On 1 September 1973, North Bay Teachers' College was formally integrated into Nipissing University College, becoming the new Faculty of Education and ceasing operation as an independent institution.

Fonds consists of records generated by North Bay Teachers' College while carrying out activities relating to the provision of post-secondary teacher education in North Bay. The fonds documents activities such as administration (including human resources and property management), admissions, and grading of students. The fonds also documents student life through yearbooks, event programs, and student magazines, as well as class reunions of college alumni. Most of the records were created or accumulated during the years of the college's existence (1909-1973), although some records (such as the alumni class reunion booklets) appear to have been added at a later date because they relate to the the college.

The fonds is arranged into six series according to documentary form or activity. Several files and items are not part of any series, as they do not relate to a common activity or share a documentary form. Records are mostly textual and principle documentary forms include registers of admissions and grades, yearbooks, academic calendars, and alumni class reunion booklets.

Access to some files and items is restricted for protection of privacy reasons; see lower levels of description for details.

The image linked to this description (north_bay_normal_school_ca1915.jpg) depicts North Bay Normal School circa 1915. The image is from a postcard in the Institute of Community Studies and Oral History fonds (see file 0247-04 - Individual photos, postcards).